Methylene chloride is widely used in many industries. It can not only used for chemical industry, but also applicated in pharmaceutical industry. Methylene chloride has the advantages of strong dissolving capacity and low toxicity. It is widely used for safety film and polycarbonate. It is also regarded as paint solvent, metal degreasing agent, aerosol sprays, polyurethane foaming agent, release agent, paint remover and correction fluid.

Methylene chloride is a colorless liquid. It can used as a reaction medium in pharmaceutical industry and also can make into oil dewaxing solvents, aerosol propellants and synthetic organic extractant. On the research of plant genetic, methylene chloride can used as solvent and mutagens.

In China, methylene chloride is mainly used for film production and medical field. Consumption of film production accounted for 50% of total consumption. Medical field only account for 20%. Cleaning agent and chemical industry consumption accounted for 20% of the total consumption. Generally speaking, methylene chloride is synthesis of chlorinated with methane. Methane chloride by chlorination can get a pile of mixture which has four kinds. Because of their boiling point distance is relatively large, people can separation and purification through ordinary fractionation technique. 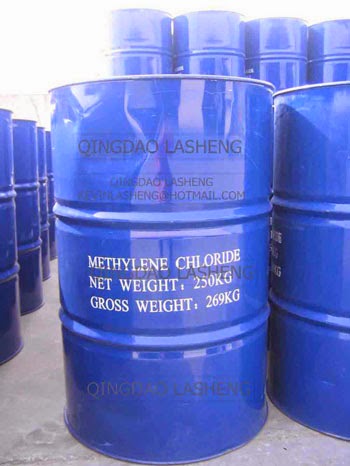